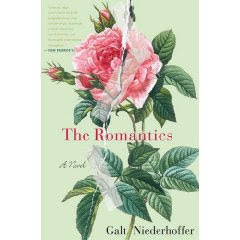 Awhile back I posted about a book I'd received under fairly-mysterious circumstances. I finished it a couple nights ago, and have to sing its praises.

The Romantics is a novel about a group of friends who, several years after college, reunite for the wedding of two of its members. In the years gone by, eight have paired off into couples, including the bride and groom. Only Laura, the protagonist, remains single... but she has a past with and is still in love with the groom.

This book is all at once a look into the dynamics of friendship, class differences, and the way love can shape - or ruin - a life. Torn emotions? Front and center. Cynicism? Present. Suspense? Check.

Galt Niederhoffer's prose and cadence, while so rich and flowy they're almost distracting, push the story along. Her words have combined to create an apt and smooth narrative, full of sentences that speak beyond the mere terms presented. So much lies behind Niederhoffer's words; she has way of telling you so much, with what seems like such little effort. An example:

"Conceptually, boys coveted Lila, but it was Laura they wanted to possess."

In addition to the quality of writing within, the plot is fast-moving and thought-invoking. I highly recommend this book!
at 10:05 AM

That sounds great! I have to say, the cover would totally turn me off in the bookstore.

Reading your description filled me with sadness because I worry I don't have another story in me. Everyone says they have tons of ideas, but I got nothing.

Yeah, my perception of the cover doesn't really meet up with what I took from the book. Funny that.

I know what you mean. I thought the same thing as I worked on WIP 1: How do novelists come up with idea after idea? But then, just at the right time, the premise for WIP 2 presented itself. You'll have one, too, when the time is right.

Sounds like a nice summer read. I like how you describe the writing -"full of sentences that speak beyond the mere terms presented." Don't you love writing that is so effective, making you reread it just for the beauty of it? I'll put this one on my list!

If you gals read it, you'll have to report back!