From Fiction to Truth

Back when I was a writer of fiction, and planned the same for my future, I had no idea how important truth would become to me. 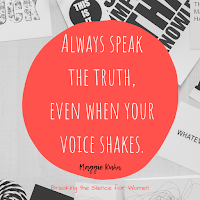 Now, roughly a decade later, truth is my platform.

I didn't anticipate the shift. I've been hesitant to wholly accept it, too. Thought I still had to honor the fiction dream, make room for it, keep myself promised to it. That *that's* what made me a writer.
I've allowed a feeling of guilt about it to fester, even---not just because there has literally been no head space for fiction, but also because some part of me didn't think it was okay to change my mind. To change course.
Cue epiphany!
I see now the course for me was set all along, I've merely had to arrive at it in my own time. With my own truth in tact, and with an understanding that it's my power and ability as a writer which helps me share truth for others. That's what my advocacy is borne of, and it bolsters the plans I have for the foundation I've been building and want to expound upon. Ideas on top of ideas, and that's my power and ability as a creative.
Maybe my fiction was only meant for that life before, the one I got myself out of. Maybe it's good and intended that I choose truth now, fully, not just for myself, but for all the others who need it.
Fiction has its place but I don't think it's with me anymore. It's time for me to embrace that.