I'm Not Afraid of Bully Men

I recently had occasion to prove it to myself. That I'm not just talk when it comes to my advocacy, or speaking out against abuse by men. That I've grown a full, beautiful backbone and, it turns out, I know how to use it in real time.

There was this thing at work. A thing wherein a man who believes he makes his own rules, a man who wanted to take control when it was mine to maintain, tried to take advantage of someone I was helping.

Not on my watch, as they say.

First I held the reins so that This Man couldn't get what he was after. Then, following, I called him on the behavior.

The exact detail of exchange isn't important. What's important to know is that as he sat with a pseudo-dumb look on his face, I illustrated to him what he'd done wrong---as if he didn't already know---then explained that I'm not going to allow such behavior, and informed him he'll have me to answer to if he continues to pull the same shady, disrespectful tricks with my people.

This Man is probably 6'0" or 6'1" and a good 275+ pounds. Fleshy. Phony and inauthentic. His are dark, disconnected eyes. He thinks he's above the standard operation the rest of us adhere to. He's got all the red flags of a controlling, damaging narcissist.

As you might expect, since this type reacts to challenge and strength, my lecture angered him. How dare I talk to him in such a way. How dare I assert both my conscience and independence. He'd just show me.

He lifted himself from his chair to full height, and took a few steps at me. His goal couldn't have been clearer.

I'd already been standing tall -- I'm 5'7" -- but straightened my shoulders. I looked him straight in the eye and said, "You can stand up if you want, but you're not going to intimidate me."

And because this, too, burst his bubble, he faked opening the door (which had been closed) behind me---as if that had been his intention all along---then took his seat again.

Weak. Cowardly. No bite whatsoever, because he'd faced a worthy opponent, and I wasn't going to let him win.

I'm not afraid of bully men.

Changed: Not Just a Charm

I work in a funeral home and its cemetery, have for over a year now. It can be tough and draining, but it's rewarding. I find it challenging and yet filled with some of the best, realest parts of human nature, and the magic of life at its end. There's only one way to say I love the industry.

I spend a lot of time with families, and a fair amount of that time is devoted to prearranging funeral and cremation services. Sometimes it's a spouse planning for his wife. Sometimes it's a woman for her sister. Other times it's an individual making his or her own plans, whether because they're of sound mind and sound body and understand that that's the right time, or because they've received a diagnosis and have no choice but to get their affairs in order. It could be years in advance, or just days before a passing.

Today I sat with the first example, a mid-age man getting some ideas on paper for his wife. He's an educated, experienced man, kind and conscientious, well-liked by the others at our establishment who know him. I've met him twice now, and he's the right kind of open and authentic, a good sort of soul. You can just tell. No red flags or false pretenses (both of which I've become rather adept at sussing out), nothing uncomfortable to vibe on. 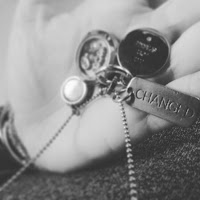 He interrupted our flow of funeral conversation to ask, "What does the 'changed' charm mean?"

It's not often folks pay attention to the hodgepodge of pendants I usually wear together on a single chain. Rarely has anyone mentioned them, so I was surprised. But I didn't have a problem answering.

I told him I'd bought this charm -- which says "for the better" on the back -- after I left an abusive marriage several years ago. That back then it was about choosing to embrace the manifestation of change necessary for my eventual healing, and that now it's a reminder of how far I've come. "It's been seven years and I'm happier than ever, healthier," I said. Changed.

His reaction was immediate. His chocolate eyes, so close a match to his skin, turned soft and he gently placed his hand on mine as he said, "I'm so proud of you."

I've gotten braver these past years. I'm not afraid to tell my story. I share when it's appropriate, if it's timely, sometimes unexpectedly, even if my voice shakes or if my passion makes me fiery. I share.

It's been eleven years since I created Something She Wrote. It's been seven since I wholeheartedly called this place my home. Since I nested here. Kept it warm. Left the light on for me and for you.

Used to be I spent a lot of time in these digs. This is where I honed my writing. It's where I found my creative voice.

In those seven years everything has changed...

I got divorced in the fall of 2011. I subsequently learned to identify the word "abuse" and how it applied to me, which led to my passionate and ongoing advocacy for women who are victims and survivors of domestic abuse. I legally restored my maiden name.

My two daughters are now thriving, incredible teenagers. We've moved a few times, and find ourselves rooted in a town that's been supremely good for us. It's just the three of us---has been the full seven years---plus the old cat and special needs chihuahua we've taken in.

I've had a journey through jobs, and worked hard not just to prove myself but also to earn some state licensing, which led me to the funeral services industry. Turns out, it's something I was made for. Who could have guessed all those years ago?

I'm different. After a lot of effort I'm transformed. I'm independent and self-sustaining. Determined. Emotionally and mentally sound. Fulfilled. Healed, and at peace. These years are where I found my strength.

Still, somewhere along the way I lost the writer I used to be. She got buried under many other things which didn't ask to be priority, but needed to be anyway. Now it's time to find her again. I want to get back to writing, really writing.

Today is my 40th birthday. What better day to reveal the revival of Something She Wrote, and launch my search? Already I feel like she's within reach.

Maybe I just needed to find my way back to this old familiar place of my own.
at 7:41 AM No comments:

View my complete profile
After a seven-year hiatus, I'm bringing SSW back.
Here's where I'll try to find the writer I used to be.
At womandetermined.com you can check out the advocate and coach I've become.