The notion has hit me, and I can't ignore it. Time for another giveaway!
`
Many of my followers read and/or write YA fiction, and I know some of you have kids who'd enjoy these titles. Check 'em out!
`
`

Willow Run
by Patricia Reilly Giff
new paperback, Yearling
this may actually be Middle Grade?
`
Back cover copy:
Margaret "Meggie" Dillon's life in Rockaway, New York, has been turned upside down by World War II. Her older brother, Eddie, is fighting in Europe. And she's heard that anywhere but Rockaway, her grandpa would be turned in because he's German and might be a spy. But Grandpa became a loyal American citizen long ago. Could he be taken away?
`
Meanwhile, Meggie's father has announced that they must help the war effort and move to Willow Run, Michigan, where he'll work in a factory, building planes. Meggie is sad about leaving Grandpa and her best friend, Lily, but she tells herself that Willow Run will be an adventure.
`
There Meggie meets Patches and Harlan, other kids from far-off places whose parents have come to do their part in the war. And she faces questions about courage, and what it takes to go into battle--like Eddie--and to keep hope alive on the home front.
`
` 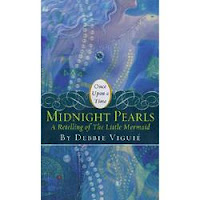 Once Upon a Time: Midnight Pearls
(A Retelling of The Little Mermaid)
by Debbie Viguie
new paperback, Simon Pulse
`
Back cover copy:
In a quiet fishing village seventeen years ago, one lone fisherman rescued a child from the sea. He and his wife raised the girl, Pearl, as their own daughter, never allowing themselves to wonder long about where she came from--or notice her silver hair, unusually pale skin, and wide, dark blue eyes.
`
Pearl grows from a mysterious child into an unusual young woman, not always welcomed in the village. As all the other girls her age find husbands, she has only one friend to ease her loneliness. One very special, secret companion: Prince James.
`
But their friendship is shaken when trouble erupts in the kingdom--a conspiracy against the royal family combines with an evil enchantment from beneath the sea. Now, just when Pearl and James need each other most, bewitching magic and hints about Pearl's past threaten to tear them apart... forever.
`
And now, because YA isn't my niche but women's fiction is, here's a third title!
`
` 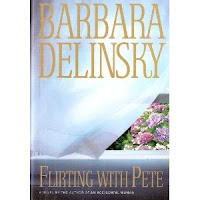 Flirting With Pete
by Barbara Delinsky
like-new (read by me) hardcover, Scribner
Janna's dust, no extra charge!
`
Barbara Delinsky has written many bestselling novels over the past two decades, including Searching for Peyton Place, An Accidental Woman, The Woman Next Door, and Coast Road.
`
For this book's summary (which is too expansive for this already-long post), see here.
`
`
To be entered for this giveaway, leave a comment with your title preference. If you're interested in more than one, just say so (you can only win one, though). At contest's end--next Tuesday, May 11th, 8pm CST--I'll categorize names and hold three separate drawings. Giveaway Guy (my hubs) will draw our winning names, which will be announced in Wednesday's post.
`
Good luck! And have a lovely weekend. :)
at 6:00 AM

Oh yes, pick me! :) I'd love to win the first one. But really would be more than happy to win any. They all sound like great books. Thanks for the reviews. :)

Hey, I'm selfish, I want to be entered for ALL.

How did I not know about the retelling of The Little Mermaid story???? I thought I knew all mermaid stories. Must.Have. Midnight. Pearls.

The others sound great too but I'm hoping the mermaid gods grace me with good luck and let me win THAT book. :)

Any of them. All of them. You know me, I'm not picky. I wanted to tell you a friend is going to lend me The Art of Racing in the Rain to read here soon. Very excited.

Best wishes to your contestants. I'll have to wait for the prizes that include more scratching and body odor.

Have a good weekend.

My daughter would love it!

Yes, Willow Run for me. I love, love the cover and title.
Blessings
jancline@ymail.com

I think my comment got eaten up somehow. So, I'll try, try again. :)
Flirting With Pete by Barbara D. If I win. *Fingers, toes, eyes crossed*

Both Willow Run and Midnight Pearl sound interesting, and of course, who would say no to women's fiction.

those each look intriguing and
wonderful. good luck to the
lucky winner.

*jumps up and down* I wanna be entered for both of the YA's. They both sound great!!

I'd love Willow Run. I'll read it first, then pass on to my granddaughter.

I love Flirting with Pete. Such an amazing story.

Hi! I would love to be entered in the drawing! Willow Run would be my first choice, but I'd be happy to win anything! :)

Ooh, I would love Midnight Pearl! Sounds awesome! Thanks for having the contest!

I'd love to have Willow Run. Thanks for the opportunity, Janna!

Very curious about Midnight Pearls. I LOVE The Little Mermaid! :)

I'm not feeling a need for any of these books but wanted to say that Patricia Reilly Giff is one of my favorite authors - her books were ones my students loved as well. What a cool thing you're doing, Janna.

Yeah they all sound good so go for it! All three!

Cool giveaway! I'm in! All three sound amazing, so I have no preference :)

I left you an award on my blog today!

Have a wonderful Mother's Day Weekend!!

I JUST HIT YOU UP WITH AN AWARD ~ CONGRATS! STOP BY MY PAGE TO CHECK IT OUT:-)

willow run, I would choose that. Please enter me.

I would like to be entered for willow run please.

I live VERY close to Willow Run! The airport is still there!

Wow, how nice! Well, they all look good to me:)

I love giveaways. I think Midnight Pearls looks like an interesting read.
Maribeth

The other book sound interesting but this is more my type of read.

I popped over from Lydia Kang's site to say, "Hello!"

Oh, Willow Run sounds like one that my daughter and I would both enjoy.