She signed with a major record label when she was a teenager. Her debut album climbed the Billboard charts, went certified platinum within months, and she earned more than half-a-dozen Grammy nominations.
`
As her success grew, she became "known for the love in her music that has inspired and motivated people worldwide."*
`
But then she virtually disappeared from the music scene. Why?
` 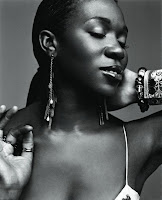 Singer/songwriter India Arie looked back recently, saying that she had "gone so far off the path of my own vision, I didn't even know what that was anymore . . . [but] I've been rebuilding. I prayed my power back into my body. And ... I started just making the music I love, following the guidance of spirit to a tee. I didn't censor or second-guess...
`
"And while I've never said anything I didn't want to say [in my music], I've never said some of the most important things I do want to say. About acceptance versus tolerance, and the oneness of all people... But now I have.
`
"I finally reached the fork in the road, and I chose the path of authenticity. I don't know what's going to happen. But I feel good!"**
`
This woman inspires me. With her philosophy, her love, and spirituality, with her authenticity.
`
India Arie's story stirs my faith. It tells me that we can refine our intentions and our wants, we can seize authenticity, and we can be all the better for it--even when we don't know our fate.
`
Watch one of India Arie's lovely videos.
`
Career stats found at Wikipedia; photo from examiner.com.
*India Arie on MySpace
**O Magazine, October 2010
at 6:00 AM

It sounds like she has a message that needs to be heard.

We all stray from the path we should be on from time to time. I'm glad she is headed back in the direction she needs to be.

Love this - "It tells me that we can refine our intentions and our wants, we can seize authenticity, and we can be all the better for it--even when we don't know our fate." Beautifully said!

Oh I love this - if only everyone would embrace who God created them to be, this world would be a different place, wouldn't it? I needed this post today. Thank you!

I love India Arie, she's the real deal. Can't wati to hear waht she comes out with next.

Good for her, that she had the courage to pull back and take stock of her heart. That's admirable.

Jen
Audience of ONE

Yes, very inspiring. Thanks for sharing.

I love India Arie. I seriously played her debut album so many times I know it by heart.

I'm so glad you shared this with us, because now I want to get another of her albums!

I love that she listens to the Spirit. That is my prayer that I stay on the path laid for me by my Heavenly Father. When I hit the fork in the road I hope I don't disappoint:)

Oh how easy it is to get caught up in the whirl wind of the world and forget who we are and what the Lord wants us to be doing! So glad you shared this message today to remind us that we all need to take time to re-evaluate our lives.

Good point. I like her choices and why she made them.

I've had so many people tell me to write for the market. It doesn't sit well with me.

If the Lord leads me to write something that happens to be popular with the market, great. At this point, I'm moving against the current.

"gone so far off the path of my own vision, I didn't even know what that was anymore . . . [but] I've been rebuilding."

I can appreciate that. Interesting how often we feel alone on our paths. Come to find out, many are on it with us.

I actually heard of her on Blue's Clues. ;-)
I think this can happen to any artist. I hope she finds what she's looking for.

Wow.. I'd never even heard of her until today! Thanks for this!

We all need to celebrate what pushes us towards our authentic selves. Great message to share Janna. Thanks!

i love what she has to say about choosing authenticity. Great stuff. And I agree with her. It takes courage, but the best life is lived after that choice.

I respect persons who can make such courageous decisions--even knowing that their public star will loose lots of shine.

This really grabbed my when I read her words in "O" this month. I think it's that she was so clear about knowing her path. And maybe we need to wander off from time to time to really know where home and authenticity are.

What inspiration! I too choose the path of authenticity.

Love her message! Will listen to her music and soak it up. Thanks for making me aware of this lovely person. Her strength to follow what is inside is hugely inspiring.