A Mouse With Two Names 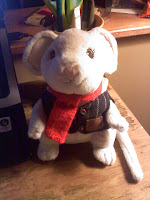 There were cartoon names like Bernard from The Rescuers Down Under and Stuart of the Littles. Fitting literary suggestions like Heathcliff, Clive (for the C in C.S. Lewis), Sawyer, Gatsby. Names from my novel-in-progress (how did you know?), which were Hank and Emerson, and then Samuel, a name I always wanted for a boy of my own (didn't have, probably won't, maybe a dog someday?).


The name that popped in my head was Timothy. He would never be called Timmy or Tim, always Timothy. He would need his spectacles only for reading and the pipe would be filled with a cherry-flavored tobacco. He should also have a pocket watch with a chain so he can let you know when you've worked too long.


Hmmmm... How 'bout Pip(squeak)? And I think he's British, by the way... He needs a tall dapper hat to go with his wee pair of spectacles, and he's an old soul. He's great with words, and writing poetry on rainy days. [Janna adds here: Plus, Pip is a character from Charles Dickens' Great Expectations, so there's that literary tie-in. COOL BONUS.]

How can you beat a name with all that personality? I adore it.

`
Thank you, girls! Mason, if you'd send your address to jannawritesATyahooDOTcom, I'll get your gift in the mail soon. Marie, I'll buy you lunch or somethin', okay? (Marie is a dear friend of mine.)
`
And thanks to everyone who participated or followed along. I had fun! I hope you did, too.
at 6:00 AM

Perfect! I love it!

I think it's an adorable name.

Timothy Pip. The little guy could be none other!

Love it. And Timothy was the mouse in Dumbo (I'm a huge Disney fan) so that gives him bonus points. :)

Janna, I'm thrilled you liked Timothy. And Pip suits him too. I love the dapper hat addition and he does appear to be an old soul.

What a great fit for the mouse muse...I wish the two of you many creative days together! :)

"then the mouse was named" :D

Love it. And he's just so cute!

Pip is a good name, but I liked Bernard, but alas you can't have it all. ;)