A few weeks ago, I had occasion to visit a client at his house. We'd spent weeks planning his final wishes and it was time to finalize a contract.* So, I'd agreed that since he and his mother, who is also his guardian, had already come to the funeral home where I work for several meetings, I'd visit them in their home.

We handled business first. Priority. Because mom isn't some spring chicken anymore, and son is in a delayed development place which means care for himself may be difficult, so ensuring his future needs are met was really important. It's why we'd been working diligently to find peace of mind about his eventual cremation.

Then, task met and as had been promised, mom showed me around her home filled with antiques---a thing for which we'd previously discovered a mutual love. Some pieces were decades old; many relics from her ancestors. Mom and son both had stories for each special item. 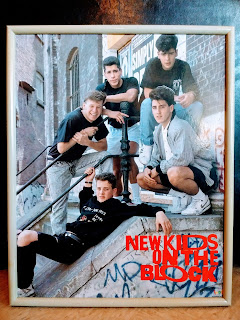 Once we'd looped the main floor, son -- a few years older than me -- was equally excited to show me his bedroom, which was in the basement. Ascending the stairs was like revisiting my own bedroom of adolescence, back in the late '80s and early- to mid-'90s. Imagine the quintessential hodge podge of favored toys, games, posters, music memorabilia, a kick-ass stereo, and random, unorganized personality.

Of all the things that caught my eye, only one truly tugged my attention. New Kids on the Block. From their prime. In a poster on his wall. I gushed. He gushed. Another mutual love discovered.

"How much do you love me, Janna?" son asked.

I hesitated internally. Prior work with those having special needs has taught me that sometimes the line between a professional relationship and a personal one can blur. I'd bonded with these two, this mother and son, but wasn't sure what he felt. So I safely said with a small smile, "I guess it depends on why you're asking."

He'd worked his way to a closet across the room and had his back to me. He opened the door so carefully, intentionally blocking from my view whatever it was he wanted to retrieve.

"I've been waiting a long time for someone to give this to, and now I know who should have it." He stalled a bit to feed my curiosity.

When he turned around, it was to hold aloft another framed NKOTB poster. An exact match to the one on his wall.

At the same time my still-a-kid heart soared, my adult, business brain crackled. "Oh, [son], that's SO sweet, but I can't accept gifts from clients."

That's when his mom, who'd been our company all along, pointed out that HE was my client. Not her. "I'm your friend. I'll give it to you, and that gets us around your rule, doesn't it?"

And she had me. I couldn't say no. 10-year-old me was thrilled. Son, too, was incredibly pleased to have found the right person for his gift...

I don't know what I'll do with this poster. Probably store it, if I'm honest, much the way he did in a closet.

I'll store it as a reminder that sometimes our interactions with people are about more than getting the job done. It's about connecting as humans, humans who have more similarities than differences. It's about seeing someone as more than a contract, or a public servant, or a passing interlude, and remembering that you're more than who you are in this moment---you're still all of your past, too.


*As a state-licensed pre-need agent, I spend a lot of my workdays helping folks with their funeral or cremation prearrangements.
at 12:21 PM