The Heretic's Daughter by Kathleen Kent - A Book Review 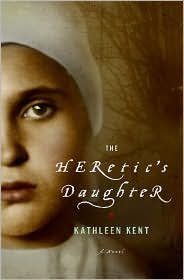 Do you like to escape to written worlds that bear no resemblance to your own? Lose yourself in one such world, one over three centuries old...

In The Heretic's Daughter, the debut novel from Kathleen Kent, you'll look at late-1600s life through the eyes of nine-year-old Sarah Carrier. Through her perspective, so indicative of an era when children were forced to grow wise before their time, were held accountable during insurmountable circumstances, we learn of a far different existence from what we know today.
It's during Sarah's tranformation from child to young woman that we learn, as she does, that her mother stands accused as the Salem Witch Trials commence. What will this mean for Sarah and her family? What does fate hold for her mother, Martha, one of the first women tried for witchcraft?
Kent's novel, written with beautiful, antiquated prose and incredible articulation, is based on true accounts of her own Puritan ancestors--including the real Martha Carrier. The reader will feel persecution along with the Carrier family, will understand the incredulity of circumstance. One will sense fear of the unknown, and the struggles of times so different from our own.
If I had stars to pass out... this book would get all five of them.

This review was written in association with Blog Stop Book Tours, which you can visit for additional information and reviews.
at 6:55 AM

I'll go pick this one up -- I'm heading to boston and Salem next month.

Janna, this looks like a cool book. I'll have to give it a look when I'm up for a new read.

Janna, great review. I agree with your comments across the board.

I was amazed that Martha Carrier could make a decision to hold to the truth even though it meant leaving her children motherless.

The tour stopped at my blog earlier this month. My review is HERE.

Nice review. Reading book reviews always makes me thing, "Argh, what if the book's really bad & sucky? How does the reviewer deal with that?" I had a few of those and it was always a sticky situation.

Angie, to be honest, that has happened to me. (It wasn't this book.) And I really struggled with how to handle my review. I finally concluded I had to maintain a level of respect because, as a writer, I know how much time and effort went into the book. It's my job to uphold fellow writers... even if I don't like their works. And I was told (by a reader) one particular review wasn't as glowing as usual, so I guess I couldn't totally hide my thoughts.

Nice review. I like Blog Stop Book Tours. They have an interesting premise going on, seems very effective.

Janna- I just started a Christian writers group. It was really scary sitting there the first few times waiting for someone to show up but I have been so blessed by them! The library gave us a room to use:)

Janna--that's why I eventually started on because no one had and I really needed a group that wrote for similar markets as I did. They even advertised for me in the paper so that really helped. But if you don't find one and don't want to start one-- always feel free to use some of us on-line writers as critique partners. I've done that too!

Thanks for the review. I'm going to buy this one today!!