These Are a Few of My Favorite Things

It found me. The chair I was meant to have in my reading nook.

I was out with one of my favorite people yesterday, and we were at one of our favorite stores. (TJ Maxx, which is hit or miss most times, but when it's hit, you find great stuff at great prices.) I rounded a corner and BLAM! there it was. A club chair, beckoning to me, both to sit down and to gander at its price tag. BLAM! It happened again. Seriously reduced and seriously good-looking meant I seriously had to have it. (I'm thinking of you here, Colby. Seriously.) And so I bought it. Here it is. I apologize for the dark picture. Our primary camera has been MIA for months (I have no idea where that booger is) and this back-up has no working flash. But you can still see the chair. It's a deep brown, so smooth. Right now it sits in our basement, until the balcony is completed. I'll show you how it looks when it's been seated in its rightful place. But for now... 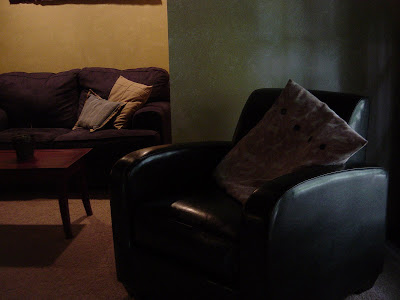 And while I'm at this favorite thing, one of my favorite humor bloggers bestowed a neat "award" on me yesterday. *blush* Colby (watch out, she spits) gave me the Brilliante Weblog Award.

And now, as any good blogger would do, I shall pass it down to those whose blogs touch me the most. Though Colby gave it to three people, I don't know that there's a limit. So I choose four.

Terri, whose inspirational posts are so, well, inspiring. And they rest my thoughts on the One who is most important. Joanne, who loves writing with coffee in hand more than I do, and whose thought-provoking blog always seems so apt. My cousin Josh who, just three years younger than me, is already one of the wisest men I know. He's brave enough to share his inner thoughts and past struggles, and mingle it all with humor, too. (Love you.) And Wendy, who has been such an encouragement to me for months now, and whose blog is presented in such a relatable way, it's like you're reading a warm note from a dear friend.

Also, super kudos to Melanie, who blogs about her life in Mexico. You, too, were awarded by Colby. So I'm not giving you a second trophy. ;)

I hope everyone's having a fantastic and productive day, and that your weekend is even better.

Aw, that's so sweet! *sniff* Now you've gone and got me all teary.

I've only been blogging for a few months, and you were one of my first readers! I value that, and thank you so much for the kind words! My first blog award, I'm very touched. Best wishes right back to you, and the chair looks sooo inviting!

There's nothing better than the perfect chair, is there? Congrats on the purchase -- may you have many happy hours of reading in it.

Thanks, Devon. I'm glad you stopped by!

Big thank you for the award. I feel like I really need to do that post because you're the third person to "award" me. Go me, lol.