Good Stuff for a Friday

There were great things to be found at Rafael's place this week. First, this picture. A Scrabble-playing dog? Love it. 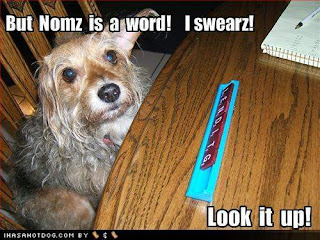 Then was the idea for an exercise, in which you attribute one word to the characters (up to five) from your current project. One word? Let's see...

Besty: living
Charles: arrogant
Tom: out
Timothy: unfocused
Meggie: fragile
`
Think about your characters. Could you describe their essence with just one word? Just doesn't seem enough when it allows for no background detail.
`
And then, Rafael announced his 1k Word Blogfest. Take a picture, write 1000 words about it, and post it all. If you're interested in participating, visit his blog Neither Here Nor There and let him know. Posts will coordinate on Monday, February 22nd. Sounds like fun, don't you think?
`
Now how 'bout those character words? Leave yours in comments.
`
And have a great weekend!
`
Thanks to Rafael for providing my content today. ;)
at 6:00 AM

I don't have a current work to participate in the exercice, but great photo!

Enjoy your weekend and V-Day!
-FringeGirl

Ah, but it does allow you to build a picture from there. Think of it as a beginning, not an end.

I'll update my blog with your name and addy Janna.

Describing a character in one word is almost as difficult as writing one sentence blurb about your story! Think I'll go try that exercise with some of my characters and see what they have to say about themselves!

Oooh that is a great activity. I'd have to think about it. Not sure I could do it off the top of my head. :)


I could play this over and over. Too much fun.
~ Wendy

I think I'll be doing the character list as a blog post next week. Thanks to you and Rafael for the ideas!

Cute picture, but I'm afraid the dog would win!

Oh dear. My characters are me, my family, and God. Okay, here goes:

OK great picture indeed. Now only if I could train my dog to play scrabble. (I'd probably still lose). ;)

You are a wonderful bloggite!
So glad we "met"!

Have a great weekend!

What a cool Friday exercise. I'm too cold from our morning snow (yeah, in Baton Rouge!) to think.

A Scrabble-playing dog? I love it!

Not writing anything right now.

I've heard of this one-defining-word per character. Not easy, but doable.

Okay... I've been here for about five minutes and I still can't describe my characters in one word.

That is an interesting exercise. I think it could only be helpful for a writer as they go along. I'm not working on anything right now, but I had fun reading everyone's answers!