What's a girl to do when she's committed to one blog post and promised another? For the same day?
`
If she's on the ball, she combines the two...
`
To participate in Rafael's scheduled 1K Word Blogfest, in which you write a 1000-word (or less) piece about a picture you've taken, and to follow up with my caption this contest ('cause see, I forgot about the first when I planned the second)... I've smooshed the two together.
` 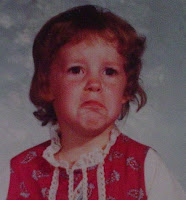 Once again, here's the photo I offered up for the contest, and I'm using it for the blogfest, too. It works because, since I haven't got a scanner, I'd taken a digital picture of this old picture for use on my computer. Convenient, eh? (Even if it means I cheated just a little smidge.)
`
Anyway, here's what became of my 1000ish (fiction) blogfest words...
`
She looked like any three-year-old, pint-sized, cherubic, that day she came to the school for her picture. Except where the other kids bounced and ran about the lobby, eager for their turn in front of my camera, she was slow-moving with a down-turned face.
`
She gripped the hand of the man she’d entered with, as though afraid to let go. And yet she strained against their connection, distancing herself as much as she could without breaking the hold.
`
They moved to the row of chairs along the wall; the girl rooting just at his knee as he sat.
`
The man had kind eyes, and their attention didn’t avert from the child but for seconds at a time. Each minute or so he’d whisper something, trying a smile for the little darling. Still, there was a rigidity to his back, I noticed, an unease in the lay of his brow, and I guessed they were not father and daughter. The comfort that comes from such a bond was missing.
`
He was an uncle, I supposed. Or the babysitter, though it was none of my business. Just curiosity. And I was just the photographer.
`
I imagined he’d had to lay down a rule before entering the building, and that was reason for her mood. Or that she’d left behind her cherished doll, the one she went nowhere without. I had not a clue, of course. I just liked to conjure stories, almost as an extension of my craft. As a way to take my portrait photography deeper, or maybe to get more out of it.
`
Soon enough it was the girl’s turn. With my assistant’s help she was lifted, placed, posed, before her sad gaze dropped to her lap, lip close behind.
`
“Hi.” I tiptoed to her side. “I’m Jane. This is my camera.” I held it low, near her line of sight. “Can I take your picture with it?”
`
She said nothing, twitched not a muscle.
`
“Let me try standing back here,” I moved to position, “and we’ll practice. How would that be?”
`
The man stood just feet away, a shrug at his shoulder.
`
“What’s your name, sweetheart?”
`
When still she said nothing, the man spoke for her. “Her name’s Valerie.”
`
I offered him a sympathetic smile. “Rough day?”
`
“She’s a little disappointed.”
`
“Mommy sick,” Valerie moaned.
`
“The flu,” he clarified.
`
“She ‘pose bring me.” That lip sunk lower yet.
`
“Aw, sweetie.”
`
“I’ll take you home in just a few minutes, Val,” the man said. “Can you smile for the nice lady first? Say cheese.”
`
I lifted the camera to its tripod, began to frame the shot. “Are you family?” I couldn’t help but ask.
`
“Neighbor.”
`
“Ah.” My finger hovered, ready, over the camera’s release.
`
“Mommy ‘pose bring me.”
`
“And she called me last minute,” Neighbor Man said. "Valerie wasn't happy with the change of plans."
`
“Oh, I can tell, poor thing," I said. "Valerie, sweetie, I have an idea. Can you be my big helper? Let’s take a picture for Mommy. Something to help her feel better, okay? Let’s make it a picture she’ll remember forever…”
`
***
And now for the winner of my caption this contest! Two, actually. We had a tie!
`
For the picture of Little Janna, the caption winners are:
`
Stina Rose, from With Pen In Hand, for "I hate CHEESE!!!"
`
and Travis Erwin, from One Word, One Rung, One Day, for "What do you mean publishing a novel is hard?"
`
Congrats, you two! Contact me with your book choice (it's fine if you choose the same title, I have more than one of each) and mailing addresses. I'll get them out this week.
`
And thanks, everyone, for playing along. All the efforts were awesome!
`
**Note: What I know as truth about this photo of me and its existence is that our neighbor (who was really a woman) had to take me to get it, since my mom had to stay home with my sister, who was sick. The rest was created for benefit of the story.
at 6:00 AM

Congrats to the two winners:) I loved your story and also their captions! This was fun!

Congrats on the creativity--definitely two funny ones.

Yes, congratulations to the winners. PS Your story is wonderful.

Congratulations to the winners! Great story, too!

I loved this idea.

Great story and of course, a super cute picture of you.

Love your story! Congrats to the winners!

Congratulations to the winners!! Your story leaves me wanting to know more, Janna. And it unnerves me a little. Of course, I saw The Lovely Bones last night and that creeped me out.

Great post x two! I enjoyed your 1K words and congrats to your winners! :-)

That was so cute--almost as cute as the picture! Congrats to the winners!

What a great story, Janna - do you remember that day at all?

Great story too. And you were a pretty cute kid.

Nope, not a memory of the day. Just one of those things where you've heard the story (and seen the picture) enough that you can build from there. :)

Loved the Story, Janna! Thanks for choosing my caption!!! :)

I thought something more sinister was afoot, but I'm glad it was innocent and true.

I was afraid it might seem that way, Rafael. Tried to smooth it out as best I could. :)

I loved reading your story (you're an amazing story teller) and the "true" story. Love that little girl's lip. :-)

Yeah, well that's the thing about flash fiction, not a lot space to explore themes. And of course we are groomed to expect the worse when it comes to children and strangers, so yeah. It's more about what the reader puts into the story than what is really there.

LOL Travis's cracked me up!!!
And I can't believe that HUGE pout is because your mommy couldn't bring you. Too adorable. :-)

I always enjoy your flash fiction, Janna! Oh I can just feel the girl's disappointment at not having her mother there.

Woohoo! I'll go with The Magic Hour and I'll email you my address. Thanks.

Great story, that is one expressive face!

I - like Raf - thought something darker was about to unfold. See what age and experience has done to us! Nice story. My avatar is a cropped, junior school photo, by the way... Tom.

GREAT story! Janna, you are soooo good at improv!!

And did I say the picture is classic????

Congrats to the winners! This was so much fun. I love your story Janna. You really know how to spin a tale :)

Hey -- loved the story and the pic is adorable!

I love the picture and the story! My mind was conjuring all sorts of fantasies about the poor childs turmoil!

Congratulations to the winners!

The romantic query letter and the happy-ever-after said...

I liked your story and I can just imagine her mom laughing until she wept with joy at sweet Val expression.
Warm regards,
Simone