The image is seared into my mind, where I will hold it forever.

He was weak. But his footing became more sure when his wife took his hand, twisting her fingers with his.
This, after 38 years of marriage. After kids, houses, jobs and retirement, grandkids. After twenty years with his multiple sclerosis; her surprise double-bypass.
After a recent, incurable cancer diagnosis for him.
`
As I dropped them off for his treatment, when they entered the building before me, they locked hands.
`
In one second, I saw what marriage is.
` 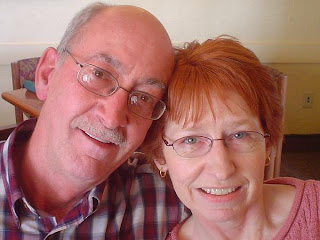 Fantastic story. What a wonderful image that must have been.

Woman in a Window said...

Love, yes, and support. Partnership is written all over them.

Yes, best to your mom, and more good thoughts and strength for your dad.

xo
erin
(sweet, what you sent my way. thank you~)

Janna that was beautiful. I love to be reminded that love never goes away it only grows with each year you stay together.

Beautiful story of love, Janna! They are a blessing.

Wow! Powerful and beautiful. Thanks for the imagery, Janna. This is so well written I could see them in my mind's eye for a moment (and I usually have trouble with such visualizations). God bless you and your family! And Happy Anniversary to your folks, too!

Beautiful, Janna! What a wonderful model you've had!

Reached in and grabbed my heart this morning. Thank you.
~ Wendy

Oh my goodness, this is making me tear up. What a beautiful post.

This is absolutely beautiful. Gives all of us newly weds a reminder of all the things we have to look forward to.

What a lovely, loving tribute to your parents, Janna.
Karen

made me want to cry!!!!!! My absolute favorite line...and what I think I might steal to use one day in a wip...

"In one second, I saw what marriage is."

Oh this is beautiful, Janna. This tribute to their love brought tears to the surface. Happy Anniversary to them!

What a wonderful tribute, Janna. Happy Anniversary to your parents and Happy Birthday to your mom!

That's a lovely tribute and I couldn't agree more.

So much love, theirs and yours. May it hold you up in the days to come.

What a lovely tribute. Happy Anniversary!

Boo hoo! You touched it perfectly. That's what marriage is and you have been so blessed to see it and be part of it.

Oh, thank you for sharing. This is priceless...
Patti

you really encapsulated the crux
of a good marriage. you are there
for each other, period.

Thanks, everyone. Your kind words mean a lot.

A beautiful tribute to very special people in your life. Marriage is such an amazing journey, isn't it?

Janna, this post just drips with love and admiration. After reading, I too admire your parents and their love touches my heart. Congrats on their anniversary and your Mom's birthday! Will pray for them and you in what the future holds. Blessings**

This was such a wonderful tribute. How blessed they are. And how blessed you are, too.

What a wonderful post! I have tears in my eyes!
Happy Anniversary to your parents! And happy b-day to your mom!

Janna, the universe has brought us together, I'll bet.
My husband, Tom, and I have been together for almost 38 yrs., married for just about 33. He was diagnosed with spino-cerebellar ataxia (mouthful, right?) about 20 long years ago.

We didn't get it, then, but the years have informed us, that's for sure. We are still wild about one another...and our kids, like you, have learned that in the end? Love is really all that counts! Thanks for the reminder. Your words are beautiful!

Beautifully said. I know that feeling.

Sniff. Gulp. Catching a sob as it escapes.

I have nothing to complain about. Thanks for reminding me, dear.

I love and admire you, and your parents.

Janna,this is beautiful. Your mom and dad are incredible. My thoughts and prayers are with you.

I wanted to stop by once more and thank you for your sweet comment over at my blog! I appreciate all your insight and advice. I plan on showing you rather than telling you!!! I promise!!!

It is beautiful to see a long-lasting truly caring relationship. It can be done. Come to think of it, I have a few friends that have now been married that long. Wow!

This post made me cry. Absolutely beautiful and touching.

This is so sweet. Thanks for sharing it. Do hang onto that image, for it will mean more than you know as time goes on. My Mom passed away about three weeks ago and I'm thankful to have a photo montage of my life with her that runs through my head often. It's bittersweet, but I'm ever so thankful for it. Will be praying for you.
Blessings,
Karen

So beautiful Janna. All the best wishes and prayers for your lovely parents. They are a loving couple and an example to all.

Praying for you all.
There is nothing quite so beautiful as a love that has endured.

Hang in there, Janna.

Oh Janna, I love this. It's true, true marriage is not all about flowers and romance. It's about enduring everything else together. That is true love.