I and my two teenagers live in public housing. People make assumptions, but all I say to those assumptions is that one does what is best when considering all options, and also, what makes a home comes down to a whole lot more. Plus, while it’s already been four years here, this won’t be a forever thing, so who the hell cares?

Today, before lunch, the maintenance men delivered a brand-new refrigerator upgrade to my unit. I never asked for it, and the old one was working just fine. Still, new fridge! I am pleased as punch.

The last marital home we shared was a house we’d purchased to remodel. Top to bottom, inside out. We did everything ourselves, or hired individuals to help, rather than construction teams and legit contractors. (There’s an essay there, too, about the way my ex cut corners and fraudulently paid for much of that house, which I did not know at the time, but for another day…)

The project saved for last was the kitchen. The heart of a home. The place you (ideally, when it's a happy home) gather to cook and eat many times a day, and talk and share and exist together. His reasoning was, it's the most expensive project. Best put off for last. Maybe that's true. Maybe that's bullshit just like so much else he blew around. Maybe it's because I wanted an adequate---not even grandiose!---kitchen desperately, more than any other project. But as a narcissist whose primary goal in our relationship was power and control, he operated by doing (or not doing) things to spite me, avoid my happiness, and serve himself. 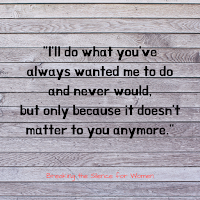 I wanted something other than the old gas oven and range I believed was unsafe. A range hood with exhaust was high on my list---I didn't have one of those at all. More cabinetry was a necessity. I wanted a dishwasher, which was another thing I didn't have. And a new fridge. I really wanted a new fridge. I wanted insulation and real, pretty, painted walls---instead of particle board-type single-layer inefficient and ugly crap which literally had the exterior shingles on the other side. But I couldn't have those things.

What I did have was an unpleasant room and a collection of box elder bugs. I had gaping gaps along the north and south walls, right at the floor---maybe six inches wide?---and those opened directly into the smelly, dank crawl space beneath. I also had an out-dated linoleum floor that had been curling up to expose chip-board base since before we moved in.

Does the mental picture help you understand why the kitchen was top of my list?

Eventually, after almost six years in, attention did turn to that part of the house. Insulation, drywall, paint were first. Still without fanfare or any speed to speak of, mind you, but things were happening.

Turns out this was long about the time I began reflecting and connecting with the truth of my reality, which is what became the process of learning I had no choice but to leave a marriage that had been nothing but abusive.

Closing the gaps and new flooring were next.

Turns out, after I announced my decision about divorce, and had arranged to physically leave with a scheduled date for doing so---suddenly, magically, as if I'd finally hit the right switch---new beautiful cabinetry was installed. Immediately following, a large appliance package including matching fridge, dishwasher, oven/range and range hood were purchased and installed. Isn't that magical?

Except let's be honest. Rather than magic, what we have here is the game of a narcissist which can be viewed in one of two ways: 1) a lavish last-hour attempt to give her what she wants, what she has always wanted but was never given, so as to finally fulfill her desires and, hopefully, manipulate her into staying, because the pleasure or gratitude might be strong enough to pull her back in, and keep her dangling on his string; or, 2) it's just another blow to her wants and needs, which don't matter, made all the more clear since now that she's leaving and won't be here to enjoy it, there's a mad dash to do it all. "See, it CAN be done. Just not for you."

I've always believed that in my case, it was #2.

It's been eight years since I moved out of that house, and left its new kitchen.

I haven't thought about this story in such a long time.

It came to mind today only because my new refrigerator was delivered. And I didn't even ask for it!

Public housing, at least where I live, is just that good. They take care of us here. The office staff and maintenance team work full time. They operate with attention and address with regularity and care for their people. They mow in the summer; throw salt in the winter. They fix. They mend. They replace. They call me "Hon." They see me, and they know my worth.

Not even my ex-husband had that going for him.
at 2:26 PM