The July/August issue of Poets & Writers used a fantastic picture of Marilyn Monroe for the cover. It's this one, in which she's perched on a piece of playground equipment, reading - truly reading - Ulysses by James Joyce. 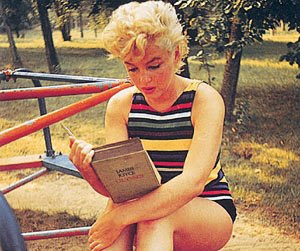 I thought the details behind the photo were fascinating, and want to share them. This excerpt is from the magazine's Editor's Note, written by Mary Gannon, the P&W editor.

"...Monroe was a complicated figure: A woman who survived--and was probably ultimately destroyed by--the public persona she'd created (all body, no brains), privately she strove for more. And, by all accounts, she recognized the importance of reading good books.
The photograph was taken in 1955 by Eve Arnold. In Joyce and Popular Culture, R.B. Kirshner quotes a letter from Arnold about the day she took the shot: 'We worked on a beach on Long Island... I asked her what she was reading when I went to pick her up (I was trying to get an idea of how she spent her time). She said she kept Ulysses in her car and had been reading it for a long time. She said she loved the sound of it and would read it aloud to herself to try to make sense of it--but she found it hard going. She couldn't read it consecutively. When we stopped at a local playground to photograph she got out the book and started to read while I loaded the film. So, of course, I photographed her'."

There's just something about that photo. It shows a bare roots, vulnerable side of Marilyn Monroe; in the look on her face you can see she's wrapped up in the story, really contemplating what it says. And that she's near the end speaks of triumph over this book she so struggled to read.

I love being privy to this moment.

That's pretty cool. I was recently talking with my husband about how some people don't think I'm "bookish" when they first meet me. I also get the "compliment" when I wear my glasses that I look smarter. I'm not comparing myself to Ms. MM (goodness no) but I can sympathize with unfair assumptions. It's very frustrating.

I thought that was an interesting photo too. She was a complicated person, that Norma Jean.

I just wish her "look" would come back in style. I'm tired of the anorexic ideal coming out of Hollywood (and everywhere else) these days.

That is a great picture. I love it when a picture is more than a snapshot. This one tells a story.

I'm glad I wasn't the only one who liked the picture so much!

Thanks for the compliments on my short story. It is actually a bit darker and different from a lot of my writing but it is one of my favorite things I've written.

And my A to Z post is scheduled for 3 PM today.