Come On, Join the Party! 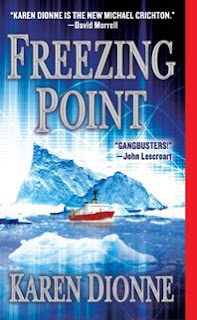 Starting yesterday and running through tomorrow, the party is open to anyone with interest. As Karen herself said, "Feel free to forward this invitation to others. This is the Internet - we have plenty of room!"

But before we head to Karen's for the party, here's the press release for more information. Enjoy!

An innovative thriller author throws a new kind of party...

In a YouTube world, it’s becoming ever more difficult for authors to grab and hold readers’ attention. To a Web 2.0 generation accustomed to tag clouds, wikis and widgets, authors’ static text-and-images-only websites are as outdated as Fred Flintstone’s writing tablets.

“Authors naturally think in terms of words,” says Karen Dionne, whose debut thriller Freezing Point about an environmental disaster in Antarctica releases October 2 from Berkley. “But on the Internet, we’re not limited to text. Today’s Internet is very visual, very interactive.”

Savvy authors are taking a page from the digital age and posting book trailers to their websites. Dionne is going them one better. With help from renowned thriller authors David Morrell, Lee Child, James Rollins, Gayle Lynds, Douglas Preston, and John Lescroart, Dionne is throwing an online book launch party where family, friends, and fans can mingle and win prizes – and catch the buzz about her new novel in the process.

As co-founder of Backspace, an Internet-based writers organization with hundreds of members in a dozen countries, Dionne knew only a handful of friends would be able to attend her book launch no matter where it was held. So she set out to recreate the traditional launch party experience on the Web.

Entertainment for the October 1 - 3 event includes video welcomes from bestselling thriller authors, a reading by a professional voice actress who’s also a New York Times author, standup comedy from one of her author friends – even testimony from a medical doctor regarding the science behind the story’s premise. There are door prizes: a boxed set of the BBC’s “Planet Earth” series on DVD, bottles of genuine iceberg water, and Penguin Gear from her publisher. And because a book launch party wouldn’t be complete without, well, books, two independent booksellers are making signed copies available.

“Writers shouldn’t be afraid of the Internet,” says Dionne. “We’re creative people. We can figure out how to use the Internet to spread the word about our books in new and exciting ways.”

Compared to a real-world book launch, Dionne says her online party has definite advantages. “Where else but on the Internet could my mom hang out with Lee Child?” There’s no limit to the guest list, work schedules and time zones don’t even factor, and perhaps best of all, Dionne’s guests can attend wearing their pajamas.

I stopped by yesterday. That's a really interesting (and fun) way to promote a new book.

It seems that with each passing week, the internet is growing more and more as a promotional tool. Just by the info in your post, the possibilities are endless, and fascinating!

It's nice to see authors have ops for P.R. and promotional tools that don't cost an arm and a leg in time & finances via the WWW.

This book is great so far. I just got to chapter 5 on my Kindle.

Yay! Janna, thanks for posting this. And I love that Aaron's been giving a chapter by chapter analysis. ;)

Hi Janna, just sending a hug and finally figured how to get in your new site...