I'm interrupting my writerly blog - and my prompt exercises (which will continue with Janet's suggestion of "The Limit" tomorrow) - to share an article. You may have seen this yesterday; I found it on Yahoo.

Let me preface what you'll be reading by telling you I have a three-year-old daughter, one I would never allow to go through such activity. Nor would our country subject her to such things. AMAZING, the difference between cultures and beliefs.


KATMANDU, Nepal - Hindu and Buddhist priests chanted sacred hymns and cascaded flowers and grains of rice over a 3-year-old girl who was appointed a living goddess in Nepal on Tuesday. 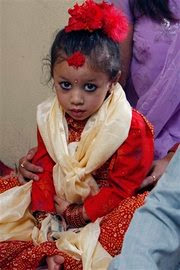 Wrapped in red silk and adorned with red flowers in her hair, Matani Shakya received approval from the priests and President Ram Baran Yadav in a centuries-old tradition with deep ties to Nepal's monarchy, which was abolished in May.

The new "kumari" or living goddess, was carried from her parents' home to an ancient palatial temple in the heart of the Nepali capital, Katmandu, where she will live until she reaches puberty and loses her divine status.

She will be worshipped by Hindus and Buddhists as an incarnation of the powerful Hindu deity Taleju.

A panel of judges conducted a series of ancient ceremonies to select the goddess from several 2- to 4-year-old girls who are all members of the impoverished Shakya goldsmith caste.

The judges read the candidates' horoscopes and check each one for physical imperfections. The living goddess must have perfect hair, eyes, teeth and skin with no scars, and should not be afraid of the dark.

As a final test, the living goddess must spend a night alone in a room among the heads of ritually slaughtered goats and buffaloes without showing fear.

Having passed all the tests, the child will stay in almost complete isolation at the temple, and will be allowed to return to her family only at the onset of menstruation when a new goddess will be named to replace her.

"I feel a bit sad, but since my child has become a living goddess I feel proud," said her father Pratap Man Shakya.

During her time as a goddess, she will always wear red, pin up her hair in topknots, and have a "third eye" painted on her forehead.

Devotees touch the girls' feet with their foreheads, the highest sign of respect among Hindus in Nepal. During religious festivals the goddesses are wheeled around on a chariot pulled by devotees.

Critics say the tradition violates both international and Nepalese laws on child rights. The girls often struggle to readjust to normal lives after they return home.

Nepalese folklore holds that men who marry a former kumari will die young, and so many girls remain unmarried and face a life of hardship.
at 6:00 AM

Oh my gosh! Was this for real? It sounds like I was reading something that took place centuries ago!

Poor baby. Women who want to be goddesses should read this account.

We're very fortunate here, sometimes I don't think we realize just how much.

I thought the same thing, Terri, but it's real. I should have included the picture... I'll go back and add it now.

I'd laugh, Angie, but there's a truth lying under your statement.

And I concur, Joanne. How sad that we often complain about such insignificant things.

Wow...just...wow. The differences between cultures is just incredible sometimes. But poor girl! Sitting in the dark with slaughtered animals? *shudder* I can't imagine!

It's so sad this child will never enjoy the many beautiful wonders of childhood.

Wow, thanks for posting this, I hadn't seen it. This is just unbelievable. At first I was thinking, how nice, they worship her, until I got to the part about sitting in the room with animal heads, near total isolation, and a bleak future. Poor thing.

I agree, Melissa. I was upset with the fact they "inspected" every inch of her to insure her perfection, and then to find out they put her in the dark room like that? UNbelievable.

So true, Barbara, and that her life afterward will be so affected is such a shame.

Agreed, Melanie. I fear she has nothing more than a bleak future ahead of her, and it sounds like this near-isolated existence without the love of her family and friends will be pretty pitiful, too. So sad.

They are also having increasing difficulty finding families who are willing to put their daughters forward for the "honour".

Honestly, the animal heads didn't bother me that much. I think most three-year-olds would be curious rather than frightened. But the worship and the isolation would permanently warp a personality.

For some reason this reminds me of child beauty pageants.

This is quite unbelieveable but I also think this is interesting to see how other cultures live. It would certainly make for an interesting book. I really feel bad for the girl.

Janet, you may have a point. My oldest was about 4 when we visited a friend (who's a vet), and she wasn't fazed by the fact that he was aborting a sick cat during our conversation. He didn't tell her WHAT he was doing, of course. But kids don't have the same references and knowledge we do as adults, and that's where fear comes from a lot of times.

Jen - I, too, see the parallel line, on some levels.

Aaron, I agree - it's fascinating to hear of these other "worlds" and the cultures they follow. Makes me so grateful I'm American - though I have to recognize the people in Nepal are used to such rituals and don't know of any other way.

AGH! How horrible... I can't even imagine.

There are many atrocities committed on children all over the world, including here. It is usually the result of parents and societies being undereducated. Very sad.

amazing and weird stuff aint it

Sad truth is for some of these people, this is a better life than what they would otherwise live. :-(