From Writer to Acrobat

My writerly tasks have been put on hold for the next week or so (though I'll still try to post here each day), as I take to the duties of a manual laborer: We've a new deadline by which to complete painting in our living room.
Why? Because our carpet guy will be unavailable for the three weeks leading up to Thanksgiving. And since we don't want to wait until after the holiday for carpet installation, we're busting hump to get everything ready by the 8th. Eep! That's not far away!
It seems like so little time because we have a lot of wallspace in the living room - some of which the contractor is still taping, mudding and sanding, and most of which still has to be primed first. We also have to sand, clean, and poly-urethane all the exposed beams. I suppose it's most overwhelming because there really is no we... misterwrites is still working six days a week (12+ hours each), which means he's unable to help... and it'll just be me. (We're not willing to pay the contractor for the work we could just as easily do.)
Oh, I'll make it happen. What's that saying about eating an elephant one bite at a time? That's how I'm approaching this; one task at a time.
I worked on the beams yesterday. Here's me at the peak of our living room - thus my new title of "acrobat" - on the scaffolding, almost sixteen feet in the air (talk about a deer in headlights... and what's with the hair?) : 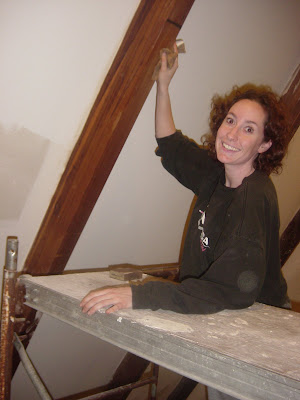 Here's the view down, from where I was perched: 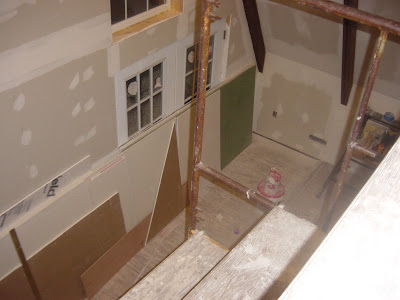 GO JANNA! You can do it! Your hair looks beautiful! When we put our minds to it, we can do anything.

It is going to be a beautful room! And way to go to be brave enough to be that high up!! My sister-in-law did something similar in her home and it is gorgeous--yours will be too! Work hard!

Wow, what a room! It'll be beautiful. What colors are you going with for the walls and carpet?

Ohhh...I'd paint just about anything, but I don't do heights. It's making me dizzy just thinking about being as high as you. I panic on a step-ladder. It's quite pathetic.

You can finish on time...no problem. Acrobats can do the amazing!

I really appreciate the vote of confidence, Terri. I'll hear your encouraging voice chanting in my ear. :)

Joanne - The walls will be the same as the balcony, which, if you remember, are a mocha brownish. (And how can one go wrong with mocha anything, right?!) It's going to be so warm and cozy.

df - I surprised myself yesterday! I haven't yet trusted myself to do anything of significance up on that scaffolding - and if you could see the catalog of my clutzy bumps and bruises, you'd understand - but I found a new confidence yesterday. It's like my instincts came out, and I could move around alright. We'll see if it was a fluke - I have to get back to work here shortly!

Oh! And we haven't picked the carpet out yet, but likely it'll be a neutral tan.

WOW. That's quite the project! But I know it will be worth it. Can't wait to see the finished room!

I'll be in awe of you if you get all that completed.

Get back to work!

My stomach turned just looking at that pic! Every time I climb a ladder or stand on a desk, or chair, the room spins. You go girl! We have most of our drywall up, but we still need to plaster the seams and such. *Sigh* When will it ever end? Have fun with your project!!

Well, you're a braver woman than I, Janna. Just thinking of being up that high and trying to do ANYTHING besides not freak out makes me, well, a little faint. :D

I'm sure it's going to be beautiful, though. I love those beams!

Yowza that's high. I consider myself a pretty fearless painter, but I've never had to climb a ladder over six feet. Your project just might break me!

WOW! That's really high. Are you anchored to anything? It'll look SO much better doing it yourself because you'll have the satisfaction of knowing what went into all the work. I can't wait till it's all done for you!

Oy, girls, I appreciate all the well wishes. Apparently I stumbled upon both cahones AND cat-like skills, because I did okay on the skaffolding, like yesterday.

I can't say I had fun, but I got a lot done. Now I'm relaxing a little while some laundry washes, and will go to it again tomorrow! :)

You go girl! You're right, it will be worth it.

You can do it, you'll be thrilled when you're finished. But don't eat an elephant...I hear they cause indigestion somethin' fierce!

LOL, Colby! I suppose that's something to consider. :)

Pink - Thanks! It's not as scary as it once was. Fortunately though, I'm almost done with the higher up stuff!

Who's the butthead that took your picture while you were working? Where was their sandpaper, if one may be so bold??? Better you than me kid, I'd need a bucket around my neck. Of course, you were wearing a safety strap, right? Hard to write with a broken neck.

crazynance - ROFL! Me! I did autotime on the camera. Misterwrites was getting some much-needed snuggle time with our girls, and I took the opportunity to jump into my work. And no, no safety of any kind. Just a healthy fear that made me extra-cautious, and constant prayer for safety!