It's Official: I'm a Collector

I bought my first old typewriter, a Smith and Corona, soon after I said to myself, I'd really like to have an old typewriter. It'd just be neat. And what should happen, but that one nearly jumped out and bit me whilst perusing a local antique store. I fell over myself getting to it (not really, but can't you just see it?), and knew within seconds that baby was mine.

The shop owner said, upon my approach to the checkout, "I know what you're going to do with this. You want the keys for making jewelry." While I actually quite love the idea of such jewelry, I knew I wanted this machine as is. "Nope. I want it just like this." I think it adds some authenticity to my writing nook. 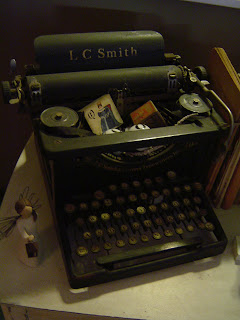 Old typewriter numero dos came to live with me a month or so ago. Some girlfriends and I had gone to a few of our favorite haunts, and this one's silver case winked at me from a corner. It's much less exciting than the S&C, but it's also much smaller and lighter. It's a portable HermesBaby Featherweight, from the '60s. It's neat because it disappears into its prim little box. I imagine a war correspondent or some such toting it around. 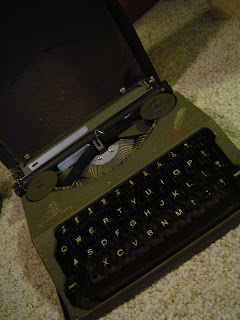 After the addition of Hermes to the family, misterwrites and I had a conversation about how typewriters would be a sticky item to collect. Typically they're big, clunky. And they just sit, doing nothing. I knew I'd not seek out any other machines.
But then...
Last Friday, when I had the day to myself, I went antiquing. I was taking my time, browsing and enjoying the calm process. And then - what is it with catching my eye? - there is was, my new piece de resistance... a dial typewriter from the 1930s. I had no clue such a thing existed! Turns out, it was created as a toy - but a working one, at that. How could I not get it? Tell me it's not cool. 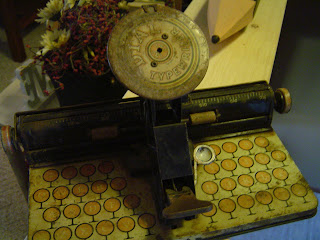 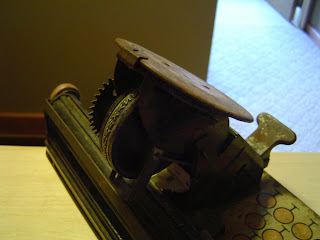 Those look very old!
My Mom gave me a typewriter once for Christmas. It had an ORANGE case. Can you tell it was the 70's? I never used it. I think she typed her Christmas card letters on it for a while.

That's so cool. So they're pretty much decoration pieces? Do you keep them in your writing room?
:-) Nice hubby! Must be making up for that thoughtless comment *snicker*

Oh, Jenna, they are so beautiful! I envy you.

I got my first (and only) typewriter from my dad when I announced that I was going to become a journalist/writer. I still have it somewhere in Romania and dream about someday having some space in my luggage to bring it over here.

I can see the attraction as a writer, but having flunked my typewriter courses in high school (using old IBM machines) I prefer the puter.

Yep, it's official, girl. Indulge yourself. They're beauts!

Great collection, Janna. And so tied in with your writer identity, making it all the more meaningful. Enjoy!

Oh wow! I've never heard of a dial typewriter. How cool. While the S7C is my favorite of yours, I love the idea of toting a typewriter around. So neat!

Capri K - That rocks! We had an electric typewriter back in the early 90s. Somehow it wouldn't look too cool sitting in my space. :)

Jessica - I do. Though the room is getting filled quickly - so probably another reason not to go crazy with this collection!

FringeGirl - It's definitely my favorite!

Sooooo fantastic, they're gorgeous. Good for you! Everyone should collection something.

I LOVE old typewriters! And hey, if you have room for them, I say go for it. ;-)

That last one is so cool! I have a degree in decorative art history and worked in an antique store for almost two years, and I've never seen one like that.

Rebecca - You know what? You're right! Everyone definitely needs a collection.

Melissa - And if they keep popping out at me, I'll have to! :D

scarlethue - PS. What a cool degree to have!!

Your post reminds me of "You've Got Mail." I can't remember the name of the actor but he plays Meg Ryan's boyfriend at the start of the movie and he is in love with his typewriters.

Michaéle - Oh, what a great movie! I think it was Greg Kinnear?

Turk - I know! All the things they've written? I just love thinking about such things!

Those looks so cool. I'm short on space but if I could I'd do the same.

Love your collection! Brings back lots of wonderful memories when I sat at my mother's Royal typewriter and wrote some of my first poems and stories. In fact, I have one I typed on onion sheet paper! Way before your time! LOL!

Ahhh! Don't show those to me. I'm a collector, too, and my husband hates it. I think his term is taht I'm more of a horder than a collector. LOL Now, I want some old typewriters. See what you've done?

LOL My mother gave me her old one like your first picture and i got rid of it, your second one is like the one I bought when I was first married and finally sold it at a yard sale but your third one I've never seen before! Cool!

*remembers her Adler manual typewriter from the 70's. And the old Remington that could type French characters too.*

I'm afraid I didn't keep them. I was a terrible typist anyway. I'm much better now, but still terrible. It's just easier to erase my mistakes.

Donna - Shoot, and it's even more telling of my age when I have to ask what is onion sheet paper? ;)

Terri - Ooh! Garage sale season is coming up (and I have high hopes). Maybe I can find more! :)

Janet - True dat. What would we do without computers?

I learned to type on a clunky,heavy black cast iron (I think it was) typewriter that belonged to my great-grandmother. My mother set it up at home for me to practice typing. You had to hit the keys pretty hard to get it to type.

However, I got an A in typing!

greats fellow collector. I have a slight thing for old books.

Woman in a Window said...

OK, that last one is extremely cool and I had no idea either. Just to have them and touch them is a joy. I had one when we had a bigger house. Now I'm without. But my kids have one each from the 50's and it's fun to see them reinvent the whole game of secretary. Remember those times?

Will you hang them on a wall when you get too many? or build shelves? .... how marvelous an item to collect...

Josh - I should like to see your old books.

Woman - That rocks! Yet another way to instill some writing interest.

Kat - I haven't thought that far ahead, to be honest. But my plan is to always have a writing space, so as long as I have some corners or flat surfaces, I'm good!

I collect typewriter fonts, LOL. And I write in Q10, so I can hear the little typewriter sound as I write. Is that a little crazy, LOL?

There's something very.... official maybe?... about the sound of a typewriter. Maybe I'm just showing my age. Ink on paper is somehow more concrete than words on a screen. Once a typed word is there, it's there for good (and it never mattered how good you got at erasing, the original could still be seen!)

Don't get me wrong, I love my compy, but I'm with you - I'd love to have a half dozen oldies sitting on the shelves with my books.

You know of course, you can't stop now - you must have a Royal and a Underwood before any collection can be remotely complete!

Welcome, Weston! Oh, but the Royals and Underwoods are the expensive boogers. It'd have to be stellar deals... or after I sell a few books. :)

Have a great trip to Fla, Janna, enjoy and be safe!

I still have it somewhere in Romania and dream about someday having some space in my luggage to bring it over here.